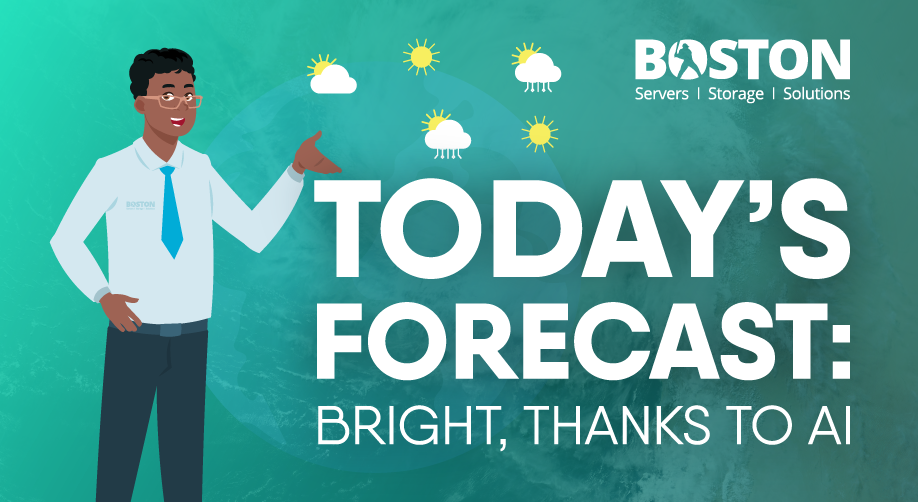 Mother Nature is an unpredictable mistress, but AI is helping us to make more accurate estimations of what her next moves may be.

Weather forecasts are made between 24 hours and 14 days in advance, but their accuracy increases around the five-day mark. GPU-Accelerated deep learning is already capable of recognising and predicting weather patterns; however, the AI being utilised for that pattern recognition is capable of much more than simply forecasting the next drizzle.

With the use of AI image and pattern recognition, we can analyse this wealth of data and make more accurate predictions in a significantly shorter timeframe. We can use it to recognise solar activity such as solar flares, environmental change such as deforestation, and identify dangerous near-Earth objects or even astrophysical events.

However, the monitoring instruments are currently providing information at a speed that we are unable to keep up with. Such an ambitious undertaking comes with its fair share of other challenges, too:

Using AI, NOAA Earth System Research Laboratories can detect features of interest in real-time, existing in multiple spatial scales such as (but not limited to):

Creating models that are already known requires fewer parameters and less training time, compared to a fully general model. Neural networks are a mix of engineered software and learned software, so certainties are coded first, and then everything else is reverse engineered using data.

Looking at storms, for example, features of interest are translationally equivariant, meaning the storm can be translated in space and time, and into multiple spatial scales. Coding the equivariance, the first assumption, requires neural networks, while coding spatial scales requires a pyramid of features – the UNET model, for example, is capable of image segmentation.

UNET is a set of convolutions and pulling operations that are performed at a variety of spatial scales and combined by skip connections. This way, each pixel can be classified and determined as belonging to a storm or not. After training, this software can make more accurate predictions with less information. Doing this by hand would require more information, such as temperature, wind speed, pressure, etc. as well as more time and expert knowledge to come to any useful conclusions. Now, with AI pattern recognition software, only water vapour data from geostationary satellites are needed to predict tropical storms. Furthermore, using neural networks, the raw data does not need to be translated to make predictions, and can even overlap sets of data such as ground radars with satellites – this can be used for automated convection initiation detection, to notify people about strong winds or floods.

Moreover, by providing different sets of data to the same UNET network, that network can begin detecting new features. Coding such a detector from scratch and dealing with a different set of phenomena would be an incredibly time-consuming process. However, feeding data to that UNET network from a satellite observing the Sun and creating labels, will in turn create a sunspot detector.

Functions built by deep learning are already efficient on GPU accelerators, comprised of repeated applications, matrix operations, and pointwise functions. The user inputs the data, and the function produced runs on the GPU, without having to manually port it to said GPU.

Again, labelling and analysing data by hand is not efficient, because new data is being retrieved before the previous set can be dealt with. For example, the Solar Dynamics Observatory (SDO) collects 1.5 TB of data/ day over 10 wavelengths – in other words, there are about 150 million images that need to be labelled, and only 30,000 have been so far. The features of interest on a celestial scale are coronal holes, active regions, sunspots, solar flares, coronal mass ejections, and filaments, and again, labelling images for each phenomenon is extremely time-consuming. By the time it’s finished, a new batch of images arrive for labelling. Pattern recognising AI such as UNET is therefore invaluable when it comes to efficient labelling and predictions.

Sunspots are tiny compared to the sun itself, so care must be exercised. A balanced dataset is imperative to make accurate predictions using AI. The majority of pixels will not be sunspots, and the software may accidentally ignore the pixels that are, and return ‘no findings.’

Alleviating this problem requires small crops of high-resolution imagery to be fed through the training process – positive crops that present a large fraction of sunspot pixels, and negative crops that are randomly selected images. Positive crops must then be super-sampled to construct a loss-function, to train the AI with half positive and half negative samples. This results in a balanced data set and eliminates the need for images to be downsized. This balanced training method allows for accurate predictions of active regions on the Sun, and applying the trained neural network allows for all 1.5 million images to be looked at almost instantaneously.

Projecting a spherical object onto a plane is no easy task, to say the least. Why would you need to do this? Because although detecting storms around the equator or near the horizon is of course possible, extra steps must be taken. The curvature of the planet breaks translational equivariance, which can be fixed by locally projecting on a plane and applying spherical convolutions afterwards. If an object of interest is on the equator, it will distort further, the closer it moves to the horizon. The AI will therefore have difficulties recognising the distorted shape. This means that different convolutions must be used for the distorted images. Projecting onto a plane would make everything uniform, and this can be achieved by replacing convolutions for a plane with convolutions for spherical objects.

Neural networks are diligent and will produce an answer even if they cannot confirm whether it is correct, and increasing the reliability is an active field of research. This unreliability is easily remedied by generating error bars and confidence estimates, using quantile regression, deep ensembles, Gaussian process inference, among other approaches.

In conclusion, the conditions seem just right for AI to revolutionise how we reliably predict natural occurrences like weather phenomena and solar activities. It’s simply down to the amount of data that can be taught to the software.

Just as with other innovations, there are kinks to fix, but the end result is near real-time detection, faster data analysis, and GPU accelerated functions that will enhance our understanding of the natural world and help us to prepare for and secure ourselves against its sporadic wrath.

There are no events coming up right now.